And the hedon torpedo... (that'd be the kung fu grip)

Thanks for the warm welcome, chalk im in Barrie. and iJay i have a spinning reel, and just recently bought a fly reel. Was out today practising my fly casting... man is it hard to pick up, just going to take time and dedication i suppose.
Cheers!

try not to worry about casting "properly" too much... it's a smooth, flowing motion,  a means to an end.  you may also want to look into the "roll cast"...  it's easy and good for people just learning, once they have the fly already out there...

Went through my surface tackle box... the plugs are called pop r(s), hence the confusion.

Thanks for the links.

And thank you, dugger, for making me track down my winningest single lure of all time.

Anyone have any of these or know where to get them? It was rebel's answer to the fat rap in the eighties, but plastic and a ball inside. One of the first "realistic" finishes.

This one probably has over 300 bass and pike on it.

Maybe it is just me but the only way to fish largemouth is topwater... now topwater after dark well holy lordy make room for daddy!


Hey, dugger.... isn't the rebel deep wee r a crankbait? Have they changed names? I have one left from 25 years ago and if anyone knows where to get more, there's a couple panther martins in it for you...

I will try to upload a photo

Welcome, Paul. I'm a little west of you (near Hamilton) but I can offer you some suggestions within an hour or two of where you are if you message me...

A lot of good fishermen on this forum, jazzy. Where are you located?

What kind of bait are you looking for, Leif?

I'm sure those links are safe, dugger... it's not like it's the Russian dude's first and only post...

Howdy Alex... this is a great forum with lots of experienced and friendly members...

Welcome. Where are you located?

While spiny water fleas are not harmful to humans, they shift the biodiversity of the Great Lakes ecosystem, said Donn Branstrator, an ecology professor at the University of Minnesota Duluth.

The spiny water flea arrived in Lake Ontario in 1982 and spread to all of the Great Lakes by the late 1980s.

“They came from the Black Sea area and were transported via ballast water from ships,” said John Lindgren, coordinator of the Great Lakes Lake Sturgeon Collaboration, part of the Minnesota Department of Natural Resources’ Fisheries Office.

Branstrator, a specialist in invasive zooplankton, explains what makes the spiny water flea so influential on the aquatic food web.

“It’s a carnivore, which means that it’s feeding on other zooplankton,” Branstrator said. “That’s its big effect in food webs. It reduces the abundance in the diversity of native plankton in lakes, which is used by a variety of fishes that are feeding on the plankton.”

“Oftentimes there are no natural predators, parasites or competitors to keep their population in check,” he said.

The population grows so quickly that it has an environmental impact on the ecosystem, and smaller fish avoid feeding on it due to a long barb-like tail spine that runs down its body, Branstrator said. 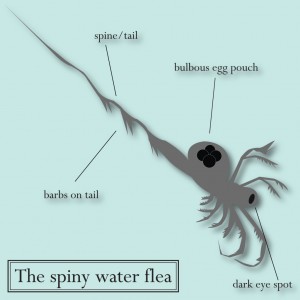 A diagram of the spiny water flea. Photo: Rachel Kraft.

“The bigger fish that do consume them have a big difficulty in passing that spine, so that spine gets hung up in the stomach like a ball and needles,” Branstrator added. “In some of the fish, the spines were penetrating the stomach wall, and the stomachs looked like a pincushion with a bunch of spines sticking out of it. So that’s likely to have some mal-effects of the life of the fish.”

The regulations of cleaning recreational equipment and boats will undergo some serious changes because of the spiny water flea’s effect on the local fish population.

“We think the way they’re getting around from lake to lake is by ensnarement on fishing lines,” Branstrator said. “The females get ensnared on all sorts of recreational equipment. It might be anchor lines as well, or the mud impacted on an anchor.”

“In the fall, the females can sense a drop in temperature and a decline in food. They produce males, and then mate with their male offspring,” Branstrator said. “So there’s this period of sexual reproduction in September and October, and the end result of that sexual reproduction is an over-wintering cyst or resting egg.”

Spiny water flea eggs can withstand many other environmental stresses.

“You can put them in chlorination for a few days, and they can survive that,” Branstrator said. “You can expose them to salt water or warm temperatures, and they survive that. They’re really durable. They’re believed to be the life stage that helps facilitate dispersal from one location to the next.

“But the eggs of this species are not very resistant to drying at all,” he said.

Branstator’s research of the spiny water flea has helped the DNR Fisheries Office create standards for how recreational boaters and fisherman should clean their equipment to prevent the spread of invasive species to other Minnesota lakes. Fisherman are advised to be careful not to spread these invaders to other lakes to protect the biodiversity of the aquatic ecosystem.

#272800 So basically, fishing get's hot before the season opens.

I've been pike fishing recently and hooking small mouth like crazy. Pulled (and, of course, released (even when IN season)) a five pounder where I normally pull in pound and a halters.

PS. When bait casting, I cast with my right hand, then switch hands, my left holding the rod and my right reeling.

Others may do, well... otherwise.

That's the gist of it.

There are two basic mechanical controls on a bait cast reel. Drag and a tension on the spool to control backlash. When adjusted too high, this will drastically shorten your casts. When adjusted too low, you run the risk of your line coming out based on the momentum of your cast. This translates into bird's nests.

Play with this control, starting with the tension set too high and find a balance right for you.

Although counterintuitive to one from a spinning background, in the long run, must people do the left/right switch when bait casting.

When I first took it up, I went almost exclusively to the bait cast, as it is easier to feather your line to make an accurate cast when fishing from a boat or canoe near logs, etc., but you really CAN get similar accuracy faith a spinning reel if it suits feathering from your index finger. I find now that my spinning equipment is my "go to" rig.

Good luck. Its a lot of fun and you get to swear indiscriminately and without consequence for the first month or two.

Welcome to the forum, henry. I used to fish the black river near orillia. Hope its still beautiful...

Welcome. Bass season is upon us!

#272750 New to OFF, looking to learn more about my area mostly the Nith

My son and I want to fish rainbows in the St. Mary's River, Sault Ste. Marie, Ontario. We want to buy a fly fishing rod and reel combo. What are people's suggestions?


You probably should start a new post in the "fishing gear and talk" section. I don't think many people, outside of those who fish the ninth river, will see it in this thread.

There's some all right bass in little late. A few pike, but I wouldn't target the pike. I have heard the lake used to be good for pike, but got fished out.

#272707 New to OFF, looking to learn more about my area mostly the Nith

the thames reservoir near woodstock is a good place to go if you have a canoe. i went icefishing for pike this year at the quarry in innerkip.  it's quite deep and i vowed to head back once the warmer weather set in...

welcome to the forum...  i've been fishing for bass around haysville on the nith, but i would certainly not consider myself an authority on it. might head back out there next week...

Canadian public right of navigation is not written anywhere – it is a right that has developed over time through Common Law. If the waters are navigable, then the public has the right to navigate. Gaining approval to restrict the public's right to navigate can only be done a few ways, including an Act of Parliament.

The full and complicated text of the bill can be found here...http://www2.macleans...th-Act-2012.pdf

The navigable waters act has been seriously diluted by the harper government. A river, lake or creek no longer is considered applicable by default, but rather by official designation. See link...