is this a chain pickerel (caught in Toronto)

21 replies to this topic

Hi, everyone. I caught this fish at the marina at Ashbridges Bay last year (September 20). I took it for a pike until reading some references to the "chain pickerel" (esox niger) having arrived in eastern lake Ontario in ~2008. Could this be one? I note that it seems to have the required eight pores along the jaw, as well as scales covering the gill cover. I can also attest that it was the slimiest fish I've ever handled.

At the time, I thought it was a slightly undersized pike and returned it to the water despite the obvious bleeding*. I had heard of the chain pickerel but had no idea that the chain pickerel was in Ontario. I still haven't found any reference to them being found in Toronto.

*I've since taken treble hooks off of my lures, and clipped the barbs on the few where the couldn't be removed without destroying the lure's action.

Some type of pikerel fo sho

Thanks for the quick responses. I found the pattern striking, too - this pic by my then seven year old has been the wallpaper on my phone ever since. If it is a chain pickerel, they're a welcome addition to these waters. Given that they're a smaller breed of pike, I wonder if they're drawn to the super abundance of round gobies.

Fiesty fish, I have to say. I actually saw it hit the lure, it really threw everything it had at the thing.

We caught chain pickerel or grass pike in the small creeks when we were young, so they have been in Ontario waters for years. They are usually much smaller than the one you caught.

1) Chain Pickerel does not have any markings in their fins.

2) Chain Pickerel has a distinct black "teardrop" below the eye.

Your fish's head is rotated away from the camera, so it is a bit difficult to tell. However, if that teardrop is there, it should be very, very obvious, especially since it extends from the eye diagonally back toward the corner of the jaw.

3) Head of Chain Pickerel is comparatively longer and larger.

The head in your fish does not appear long or large enough.

4) Northern Pike has 5 or less pores under the chin.

Thus, I would say, unfortunately, this does not appear to be a Chain Pickerel based on all these features mentioned here, despite the body markings.

I hate to use the H-word...Hybrid...unless the morphological features suggest it was a mix between the two species, and if there was DNA evidence to confirm it. Plus, E. lucius x E. niger usually has a very unique pattern - alternating thin vertical broken stripes with thin vertical column of evenly spaced small spots. These stripes and spots are diagonal and forward pointing below the lateral line. 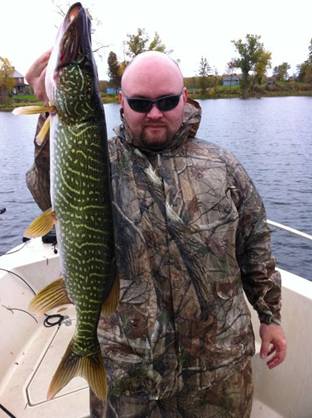 Note the pattern, the dark teardrop under the eye, and the clear fins without any patterns (fin rays may appear as "patterns", but Northern Pike's black markings on the fins are much thicker and much more randomly distributed as a mix of thick spots, bars and vermiculations).

Well this one has me confused..

Here's pics of a Skootamatta R. pike, reason I post these, is to show that not all pike have the same patterns.

Having said that, scanning through many of my pike photos, most pike do seem to have similar patterns.

I've never knowingly caught a chain pickerel, so don't have much experience to take a guess at what exactly you caught there.

Did you try sending the pic to the MNR?

Well this one has me confused..

Here's pics of a Skootamatta R. pike, reason I post these, is to show that not all pike have the same patterns.

Having said that, scanning through many of my pike photos, most pike do seem to have similar patterns.

I've never knowingly caught a chain pickerel, so don't have much experience to take a guess at what exactly you caught there.

Did you try sending the pic to the MNR?

Yes, that is exactly true. Hence, you can't always use a single feature, such as colouration or body pattern as an ID key when the species can demonstrate variable patterns. You NEED to use multiple morphological features to ID them positively.

Yes, that is exactly true. Hence, you can't always use a single feature, such as colouration or body pattern as an ID key when the species can demonstrate variable patterns. You NEED to use multiple morphological features to ID them positively.

Not sure how well the colours are showing in the pic, but it was yellow, not really green/cream, which makes it look quite strange compared to a typical pike.

I caught a grass pickerel late 2 weeks ago. I thought it was a juve pike, but the old guy I was fishing with said it was actually a grass pickerel. My ignorance about species got the best of me. Unfortunately no photos. soft bait got it.

Colours on many species can be quite variable, so it would be safe to assume that in any particular waterbody evolution would select for a predominant local colour after a few generations. You could get neighbouring lakes, each with a different mix of bottom, like sandy versus pebbly or weedy, different depth, different clarity and different rocks, that could lead to each lake having different looking fish of the same species.

Wow, thanks for the information, everyone. MuskieBait, you went above and beyond. m(

I like the idea of local variations, that jibes with what I've seen in different waters. That's what I originally thought when we plucked this out of the water. I saw what I took to be a large sculpin off the second point at Ashbridge's Bay last week, but it was a curious blue color. Since this pike(?) remains the only non-goby I've caught in dozens of outings on the city's waterfront, it came to mind when I read that the chain pickerel was turning up, here.

I emailed Erling Holm (Assistant Curator at Royal Ontario Museum) and had a chat about this fish.

Good to hear from you.

I agree with your analysis of this specimen as being a fish with an errant colour pattern of Northern Pike, which is what I think you meant to say in your last sentence of your message.

eh, I think its a chain pickerel, its got the right colors for one.

eh, I think its a chain pickerel, its got the right colors for one.

You can disagree with me...that's fine. I'm really a nobody. I've really just caught a handful of Chain Pickerel, a dozen Grass Pickerel, a couple dozen of Muskellunge and maybe a hundred Northern Pike...and 573 other species from around the world...but still, what do I know compared to Erling Holm.

But read the reply above yours...you disagree Erling Holm, the assistant curator of Ichthyology at the Royal Ontario Museum. I hope you can back up your claim. He has probably inspected and identified more fish species than you would even know...and he doesn't do it by colour pattern alone...for one.

It's not about being defensive. Fish identification requires a scientific approach, because species are defined by morphological difference and genetic difference, not some casual observations like "got the right colour". So if you are going to refute the opinion of a professional (ie, Erling Holm), then you best bring some evidence to support a scientific argument to the claim.

At the core of it, fish identification is a SCIENCE that can be learned as long as you spend the time to study the details and follow the identification guide for various species. Ignoring this process is the reason why fish are consistently misidentified by anglers.

Dude I was joking - You're very specific with your ID and I wasn't debating you.

You seem to care very much about what some random dude said online. Likely he was trolling you and got just the reaction he wanted.

I certainly did lol

I don't really care about what some random dude said online, or do I care whether you were joking or not.

What I do care, as a member of the Toronto Urban Fishing Ambassadors, is to educate anglers to identify species correctly. Species identification is a critical skill required of the anglers for these reasons:

2) To recognize invasive species and report them as necessary

The effort I spent to detail species characteristic, and the necessary approach to identify a species, is aimed to educate the members here so they can use this knowledge in the future. People can make light of this all they like, but they are doing a disservice to the angling community by propagating a nonchalance toward species identification.

Back to Toronto Harbourfront and Islands

Also tagged with one or more of these keywords: toronto, marina, ashbridges, esox niger