What is your Favourite Fish

4 replies to this topic

Well I truthfully don't really see as many posts on this from as there used to be so I want to ask a couple simple questions that have been asked many times. But as it spires on our passion for fishing and will cause to want more posts.

Q1: What is your favourite fish in Ontario and why?

Q2: Have you ever caught it, if so when?

Q3: What types of fish would you still like to catch?
Q4: What was your best memory fishing?

Those seem like good questions, I will go first.

Q1: The Northern Pike, Its the one predatory fish that you can find in any good lake, Its the king of the Pond! They're huge natural predators that really want to know wheres the beef! I also love the way they look too, as the cool one. Also despite what people would normally think, they are really tough to catch on purpose. I have bought $150 of lures last summer and still wasn't able to catch one.

Q2: I still haven't managed to land one but I have been close several times.

Q3: i would love to Catch basically everything, a Northern Pike, Lake Sturgeon, Walleye, Brook Trout, Longnose Gar and a rare Bowfin. Im a real sucker for the rare ones, they show u got skill.

Q4: My best memory fishing was when i was at collingwood not expecting any fish that night when after 20 minutes i managed to see this big rock in front of me that wasn't there yesterday. When I casted toward it, the rock went underwater. it rose a minute later a turned out to be a 5 foot lake sturgeon probably 80 years old!

Q1 - I am only limited to one Ontario fish, it is the Bowfin. Exciting sightfishing opportunities, extremely wary fish, unbelievable attitude and all out fighting ability makes this species my favourite.

Q2 - Caught my first in 2011 and probably caught dozens of them since. (If you have not caught a species, how can you say it is your favourite? What can you base that argument on? Everything is conjecture until you have actually experienced it.)

Q3 - If you are talking about Ontario only, the realistic ones that comes to mind are Least Darter, Slimy Sculpin, Mottled Sculpin, Gizzard Shad, Quillback Carpsucker and River Redhorse.

Otherwise, the list is way too long. There are over 332,000 species of fish and so far I've only caught 577 species. There's still a lot of work to be done. Top destinations at the moment are Peruvian Amazon, Flores Sea, Lake Tanganyika and New Zealand...all of which can realistically offer 30-40 new species to catch within the span of a week.

1) First time deep sea fishing with my friend, learning to launch his boat, set out trolling spread, navigate by compass and charts, spotted life on the water, getting a skirt slammed on the pass, 30min fight without any game chair, backing down and steering the boat for the best angle, first time sticking a gaff into a fish, gutting and icing down, docking, scrubbing and cleaning, and fresh sashimi off the cleaning table. This isn't a charter...it's all DIY, all hands on deck, down and dirty fishing on a friend's boat who taught me so much about boating safety, navigation and even some basic boat mechanics the few times we were stuck on the water. Doing all by yourself with first time and landing a Yellowfin Tuna (120lb after chilled on ice overnight) 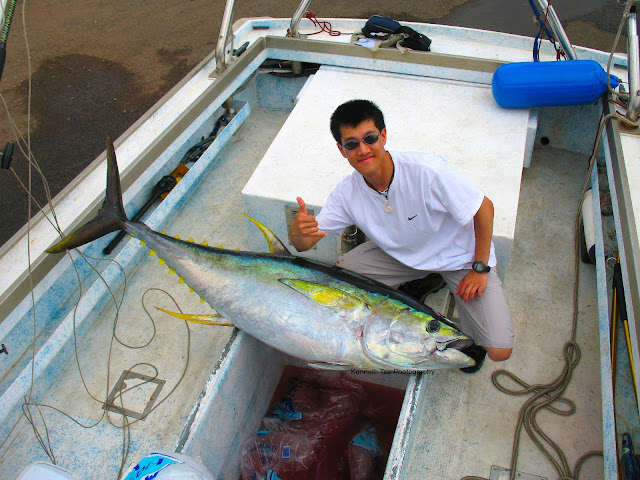 2) First time speed jigging off a party boat, heaviest jig (14oz) ever used and first time on stand up gear, first hooked and fought a 5' Copper Shark to the leader, then when everyone was having a lunch break and rest, I moved to the bow away from the crowded stern to jig like my life depended on it, finally hooked up and fought the fish without any fighting belt and just a bow rail to brace against, first run took about half the spool and it took 15min after multiple runs to get it up from 130m (400+ ft) of water, and glad it got past all the sharks that were leaving anglers with just the heads from smaller 50-60lb fish. This ended up being the biggest fish of the day, only 1 of 3 landed that day, for the smallest guy on the boat (5'2", 100lb). They all laughed in the morning thinking I couldn't do it, and everyone had new admiration after the smallest guy went the hardest on the 5' shark and the biggest Samsonfish of the trip (88lbs) 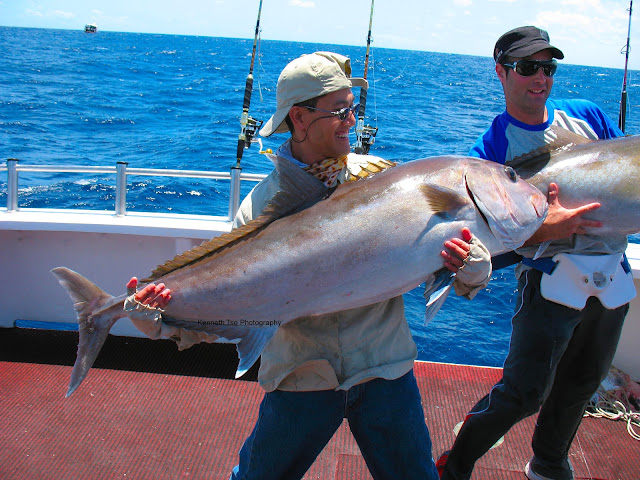 3) The first serious attempt to fish for sharks in Florida with proper gear, spend every night on bridges in the Keys sleeping on camping chair, waking up every hour to check the lines and change baits, then finally after a few days the clicked went off, an hour after dusk it was full dark, only one friend was there to help to clear lines, fish went on the upcurrent side of the bridge having full leverage to run underneath the arches, 30min stalemate with the line stretching and rubbing on the concrete ledge, finally outlasted the shark and have it up to the leader, fish caught and counted, attempted to walk the shark 800m back to shore, but shark continued to run under the arches and eventually wore through the 60lb mainline. An hour later, buddy hooked up with another shark, much easier for him to fight this fish downcurrent, but this time there were 3 people including myself to help with spotlight, leadering and rope, finally walked the shark 800m back to the based of the bridge and landed, only to discover my rig still attached to the lower jaw of the shark. Ended up having the chance to take some photographs with my first Nurse Shark (7', estimated 200lbs) 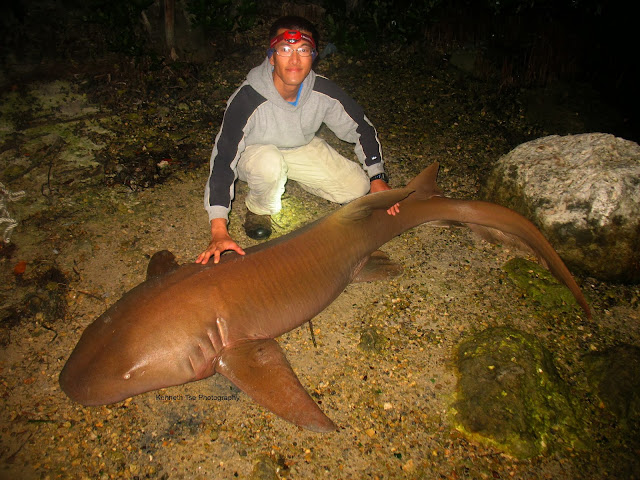 Its nice to see you here Fishing Urabn Ontario. You probably dont recognize me but I am subscribed to you on youtube, and we follow each other on instagram.

Q1 - My favourite fish in Ontario is the rainbow trout. They are tough to catch, and put up a great fight.

Q2- I have caught it many times from the many lake Ontario tribs.

Q3- Fish I would still like to catch are brook trout, walleye, and the lake trout.

Q4- My best memory fishing was when I went on trip with my family, and cousins to Algonquin and caught many nice sized smallies.

A.2   Enough times big and small

A.3   Still would like to catch a brookie, a bowfin and a musky.

A.4   Oh too many,  but I'll reminisce the most probably on my fishing trips to Mountsberg Reservoir casting for Pike and Bass.

Jumping on this trend 4 years later!

Q1: What is your favourite fish in Ontario and why?

Musky. I love the challenge, still grinding at my first one but it's all I dream about lol

Q2: Have you ever caught it, if so when?

Q3: What types of fish would you still like to catch?

Musky
Q4: What was your best memory fishing?

THIS MUSKY (buddy caught it, I spotted, click link for video)

Back to Ontario Fishing News, Current Events and Publications