2 replies to this topic

This is a little snapshot of my experience with upgrading my 12" no-name banana boat trolling motor in attempt to achieve the lake Ontario salmon trolling zen.

First a little bit of history. Reading trough this forum I did get infected with idea of going to the dip water on a small craft.(thanks Obama Chrome Bullets !)

After comparing my requirements and my budget the decision to import the kayak directly from Chinese manufacturer was made. If anyone interested I can share the details of me becoming an importer in another post. Bottom line after about four month I become a proud owner of 12" SOT kayak with optional trolling motor. 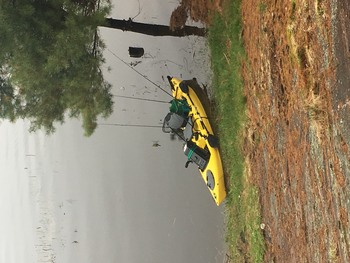 The motor is 30A with fixed speed regulator. 5 positions forward  3 reverse

switches with voltmeter, USB plugs and fish-finder mount are my upgrades. Bottom right is my home brew Dead Man Switch

Bottom left is the one of waterproof LED lights

This is inside of the box. Two 35Ah wheelchair batteries in series +7Ah battery dedicated to fish-finder. All batteries are sealed because after removed from kayak the whole assembly can not stay upright.

The next modification I attempted was installing the PWM aka Pulse Width Modulator as an attempt to get more trolling hours from the fairly small battery pack.

This is the  60A rated(allegedly) PWM switch widely available for sale online. There are plenty video tutorials with the installation guide mentioning this board.

My version of dashboard. Forward-Off-Reverse switch and missing speed adjusting rheostat( the darn thing did fail as well)

1.PWM controller does in fact extends the motor running time on one charge.

2.It does cause RF interference with the fish-finder ( reason might be close proximity to transducer and display unit in my case) could be solved by buying the shielded board or placing the board into metal case.

3. This thing will heat up significantly under load. Two ways to deal with it.

a.Get one with active cooling (which is compromising the idea of waterproofing it)

b.Buying the board with really high continuous flow rating. The board above was advertised as 60A max but got fried after few hours serving 30A motor.

4. Fuse rated same Amp as the motor does heat up and eventually blows under load.  Remedy is either fuse with higher rating than the motor or semiautomatic fuse that resets after power disconnected.

5. Originally I did wire the motor trough the switch and realized that switches should be capable of sustaining the load as well.

At this point I am back to getting the parts and assembling new and improved PWM controller 2.0

Parts I am going to test next are

PWM https://www.aliexpre....21954c4d8HGDz8 Rated for 70A has aluminum casing that will help with RF pollution and cooling. Case seem to be at least splash proof.

Yak looks great. Hopefully everything works out for you and you get to smash some Salmonoids.

Be careful, check the winds, and if ur looking for someone to get out on the pond with send me a message.

Yak looks awesome!
I’m currently looking for a trolling motor as well for mine. Nothing to expensive.
Have fun out there slaying those salmon.

Back to Fishing Gear Talk and DIY Corner

Also tagged with one or more of these keywords: kayak, PWM, trolling motor, upgrade, DIY