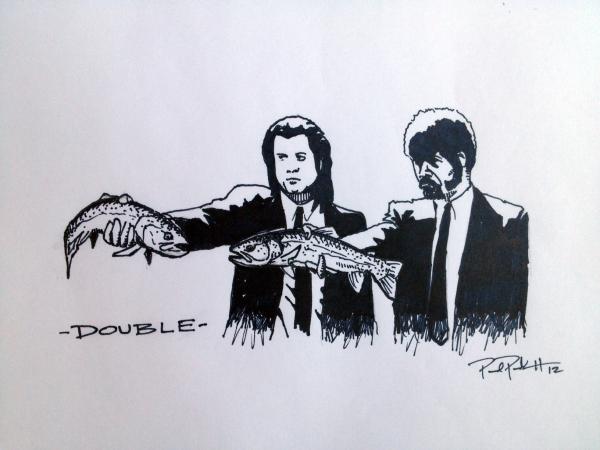 Anyways, nobody has ever caught a Splake on here? Somebody say something about them to help me out!

The most frustrating fish to catch you will ever chase.  But hey, brookies and splake take you to some spectacular places

Even with the recipe, no one can out a fly together like Chase

Bags of salmon... its bags of roe - the fish we dumped behind the tracks

Looking forward to meeting everyone

Chinnies are also tagged with radio chips ( or some sort of chip they use a scanner thingy ma jig to locate ) in their faces.  Though I'm not convinced this fish was branded in the name of science.  I couldn't find anything that looked that intricate.  This was the branding tool.

Also, not insinuating anyone was drinking on the boat - the bottle could of been some sort Norwegian Sparkling Mountain Top Glacier Water where date and location made are well important.

The brookies were in thick.

Bugs were so thick that everyone ate well.

80% of the trips were tackled with one ankle and one cankle.

Waiting on a few pictures from buddies camera and that isn't a river full of brookies... they're suckers.  The quest for brookie Megaladon continues...

We've got a custom guitar builder on board here too.

There is a live one at Midland/Sheppard in a tackle store called Lucky's.  It was there a few months ago when I went in for minnows.  Probably wont sell it to you but hey, maybe they'll pull it from the tank for you to take a photo or two?

I've read a bunch of steelhead books and if I were to chose just 1 it would be An Experts Guide to Great Lakes Steelhead Fishing : Methods, Tactics and Strategies by Kenneth R. Jaynes.

As a member of  Take Care of Trout Elitist Task Force ( the TCTETF ), I would like to chime in here.  Its not that you're totally destroying the fish by holding it by the gills but its not good, they were not designed for that.  Add to that the fact that the fish can squirm and wiggle which can result into a bigger mess.  Sure thats all they do in the bass tourneys and all but c'mon, its bass, who cares - anything other than trout is just trash ( I kid! I kid! ).  What we don't want to do is promote this type handling, before you know it noobs are finger banging gill plates and rippin' gill rakes ultimately killing the fish.  Online fishing forums are places to learn and share - keep the photos rollin' in

It could be worse - hang a musky vertically and be prepared to get an 18" Believer e-inserted anally.

However, it became tricky moving to the next hole…do I go first or let them go first? Do we fish together? Should I say something? What if the top-end of the pool was hot, should I give them a turn there?

darn I wish there were more fisherman like you around, this sounds like a dream.  Honestly, rotational angling would eliminate this sort of issue however I find it a bit unfair for the people who put in the extra work to get to a spot.  Its selfish but if a pool is hot and I get the better drift first because I woke up an hour ( for example ) early to get first dibs why can Joe Blow come in and wait in line for 15 minutes to get that same drift?  Thats a little unfair for the guys who put in the extra effort - we don't have much space around to fish here at the north shore of Lake Ontario so prime spots are few and far in between - they are typically stacked with more people than fish.  I suspect there would be a lot of resistance to such a movement.

This got me thinking about what is fishing all about for this guy and steelheaders in general?

We would all get along a lot better if we were out there enjoying the outdoors and the beauty of mother nature.  Being worried about our score, why/how buddy next to us is catching more fish, our fishing reel hero shots, photographing every fish, worrying if the fish is female so we can rape her of her eggs, worrying about not catching more than you, etc. are all taking away from the big picture.  We are so spoiled that we are able to think of these things and it can ruin a days fishing for a lot of people.  Just being able to get out and wet a line is enough for me - some people want to and can't.  When I first started steelheading I fished with individuals that had minds of little children where it was all about take, take, take.  It was very competitive, rush to get to the spot before the next one does, make sure you leave a hole first so you get the better drift at the next, fish were numbered, etc. all to say I have a bigger _____ than you. God forbid you called them while they were slaying and you were not there, the phone wouldn't be answered because they didn't want to share the gold while they were all ears when they couldn't locate numerous fish.  This wasn't going out and enjoying, this was a constant rush and fight.  Don't take me the wrong way, I love banking fish and taking pictures with awesome fish but its gotta be done with an attitude which takes the fishes well being into consideration.

Ughhhh - these days I think more and more about how much I appreciate nature and all its beauty yet I go, stab a fish in the face with a hook and play around with it until I bring it to shore only to release it... I think... I'm becoming... a hippy.  Gotta keep telling myself fish are stupid and will forget a few moments later.  I remember reading a book where the author described a man he knew that would fish dry flies for trout but the hook part of the fly was cut off.  He would go out and just watch the fish take his fly.  To me, this is reaching fishing Nirvana, he is the ultimate fisherman, not Dave Mercer or KVD or whoever else who slay fish with the newest Rapala Shadow Sunshine Half Moon Twitchy Switchy Counting DownSyndrome Fishing Minnow #weslayfish #theslayerofsteelhead #bowdowntomesteelhead #FishingArmy #thisisgettingridiculous #givemealikesoilikeyouback #imjusttypingthisoneoutbecauseitsgettingreallylongandmostlikelyhardtoread.ijusttriedtoreaditandhadtosquint.itsreallyannoying.dopeopleusuallyputperiodsinhashtagsorisitjustanewhashtag.improbablydoingthisthewrongway.ohwell

Anyways, cool topic - hope to cross paths with you guys and gals on the river - peace.

Hey folks - quick report from our outing.  The garbage hatch this year has had dismal returns compared to prior years.  I forget the total but we had ~12 bags pulled out some of which were half sacs.  This is great news.  This years PB catch goes to a fine young gentleman who found a ~7 ft modified pool skim net turned spear/gaff.  Custom head attachment that was said to have been meticulously worked on a grinder and set in place with with surgical tape - no photo of said attachment - it was taken care of immediately before it impaled one of us.

Big turn out this year - took a whopping 1.5 hours or so to do the job and with some many folks coming out it felt like we just took a hike - great thanks to all who came out

Nice to meet new faces and see the old, degrading faces of friends

Big thanks to FishHeads for coming out and sponsoring the event.  Everyone was gifted floats and stickers and prizes were given out afterwards.  Fishheads is more than just another online retailer - I found out that he participates in a few different clubs around the city with behind the scene stuff focusing on our fishery - way to go man, glad to have ya around dude

'til next year folks.

Out fer a rip are ya bud? ( from different water )

GONNA CATCH ME A MARLIN

They're typically on the bite - aggressive buggers