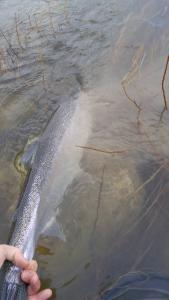 In addition to that the Kings had record setting catch rates in 2017 so i'm not sure what the complaining is for? It is estimated that 50% of the Chinook in Lake Ontario originate from natural production so it is actually better for the fishery to scale back on stocking to see if Natural reproduction can take over.

Also, alewife numbers are down which is the major reason stocking of Chinook salmon has been reduced. Even the US have been cutting back stocking numbers over the past few years and they are now stocking 40% less than they used to. 2018 was a good year for alewife and they hope to bring stocking numbers back up after the alewife rebound. Of course the internet is full of science deniers who say they saw lots of bait on their sonars so that is conclusive evidence in their mind that there is no issue with the alewife population.

I'm not into the salmon fishing anymore but I was in the area for work yesterday so I decided to head down to a west trib and see if I could get some aggression strikes. Quantities of fish were not in yet but I did find four salmon sitting in a shallow pool, the idea is to keep casting the lure around them to piss them off and force the aggression strike. It was a pretty interesting experience, the first 5-6 casts were spooking them and they would immediately swim away from the lure wherever it landed. Then after the 5-6 casts they got used to the lure and didn't seem to care about it at all, I did another 5-6 casts and the fish didn't budge. Finally on the last cast I watched a big male follow my spinner before taking a slow motion swipe and the fight was on.

It was a pretty awesome experience, I have caught salmon on lures before but I have never tried it in a shallow water sight fishing scenario. You cant really do it when the zoo is in and 10 guys are float fishing every pool but if you can find an isolated area with just a few salmon in the pool I highly recommend it.

#339632 Gonna get it right... hopefully. Tips for summer northerns and lakers

If you aren't able to get a deep troll going for lakers then you best shot is going to be vertical jigging. To do that you would need to have an anchor with 150' of rope so you can stay in the same spot, you dont need high strength rope for a canoe the yellow dollar store rope is fine. If your buddies cheap sonar is able to mark a tube jig or swim bait then you are off to the races, if not then you would definitely benefit from having a better sonar with you.


Here is a sonar video I made ice fishing. The same principals apply on soft water, jig the bait until a fish gets close and then reel away until it hits.


Here are a few better videos showing the same technique.

Thanks Guys. TC I am nearly certain those fish were herring as I know they chase baits down just like lakers. Diana you would be fine out there with the yacht, its a 1km paddle then you don't really have to move until the end of the day. The paddle board would be pretty cool too though. Staffman the yak pretty much has it all, the only thing missing is a trolling motor but then I wouldn't get my exercise.

You could probably say that is inconsiderate for me to troll for salmon in my kayak 4k off shore in big waves or to go kayak fishing at the Niagara Bar in March after I got there and found out the wind forecast was wrong.

I consider it living and the risk is worth the reward. And before anyone chimes in and says a fish is not worth your life, please don't waste your time. Of course a fish isn't worth it, its the experience, the memories and the stories that make it all worth it.

Its the Rapala M3, the M2 is big enough but the M3 is more comfortable to stand in

I just watched all of those video's again and now my excitement levels are the highest they have been since last December.

I'm hooked, one fish is all it took. Is the fight ever different on the soft water, it's like they've been injecting anabolics since March!

Glad I had my gear in the hatch today.

A little after work jaunt.

Tough opener for me as well going for steelhead. I did what I usually vow not to do and headed to one of the well known spots that are extremely packed. Low and behold relatively few fish were in that area and there wasn't all that many fish being caught around me. We went to a different spot late in the afternoon and had a hay day close to the lake. Looks like its going to be a long spring run this year.

A tall ladder is a good tool for gene management. The steelhead have no problem jumping the caledonia dam which is much taller, only the strong make it through. Judging by how close the fish in the pic are i'm sure a good percentage make it up.

Well this year I was spoiled for my birthday and recieved a GoPro Hero4 Silver edition. With one more shot at Simcoe lakers for this years hardwater season I was determined to get some good footage. I learned quite a few filming lessons while on the ice and I am already excited with new idea's for next years hard water season.

This video is really the crown jewel of my whole ice fishing season, I am so happy with the way it turned out. My bait had been dead sticking for 5-10 minutes before the video starts while I was setting up the snow pod to get a good shot of the screen. A laker must have been checking out my swammer from a distance as it didn't take long for some jigging to attract a curious fish. I need to start filming my sonar more often as it seems the fish come on the screen as soon as the camera starts rolling.

Here is a clip of the first fish of the day. A much nicer fish but with the video camera facing the wrong way at the beginning of the video its clear I needed a bit of practice. At least there's some good comedy in there lol.

Finally here is some sonar footage of one of those fish that keeps me awake at night. I ask myself, what did I do wrong? Should I have started reeling later? Reeled faster? Kept reeling rather than drop the bait back down to the fish? Simcoe lakers can be frustrating and I am still a long long way from mastering the art of angling these top predators. Lets hear it, what would you have done differently with this fish?

As my season comes to a close I am reminded of the fact that I didn't catch a single fish this year that was small enough by my standards to take home and put in the smoker. I'm still not sure if that is a good thing or a bad thing.

Are you going to go for perch? Since its your first time i'm assuming you dont have any electronics (sonar) so perch fishing will be your best bet. Just use small pinhead minnows on a panfish jig and run two rods. If you arent getting any action you can try throwing on a spoon or a lipless crank bait to call fish in to your area. they will be in anywhere from 10-40'. If you dont get anything for a while pick up and move, it can take a bunch of moves but once you find them it is worth it. Below is a link to the lake simcoe depth chart, cooks bay and georgina are the popular places to go for perching.

Also if you have an iPhone or an Android and dont mind spending 16 bucks the navionics app is the most valuable tool you can have next to a sonar. It combines the depth charts with GPS on your phone and tells you how deep you are before you punch a hole.