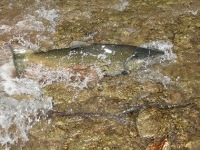 Its nothing personal dave. Like I said, I can understand your thirst for knowledge; we were all there sometime, well I was anyway.

There are other ways to word your post and titles without giving out the specific spot. We will know what you mean, and we would not mind helping you out.

Its just a little advice for next time, and it really is in the forum rules.

Hope you have a good day out next time you're down there.

Depending on where you go on Simcoe, perch are being caught anywhere between 12-45 feet...

Haven't been out for the lakers yet, but from the reports I've been getting 80 feet +...

The herring are everywhere....

With these temps we've been having lately, ice will build up on any line that you have.

Even though the weather conditions were not as good as last year, I still had a great time out...

Lots of fish were being landed despite the weather...

Props to NADO and Redneck; you guys battled those conditions well...if I didn't have to drive my brother to the airport I would've stayed longer...

I don't think you have posted one photo that I did not like...I enjoyed looking at all of them and enjoyed reading your reports; even show em to the mrs, and she agrees with me that we have to visit Alaska sometime.

You can't please everyone...try to please yourself...

ive fished with russian and asian people, but they grew up in canada and were the same person on the inside any of us else are. the part that makes my blood boil is people who just came to the country and feel that they can destroy our fishery.... thats what ticks people off the most

That is nothing compared to the idiots that have lived here all their lives and are destroying the fishery in the very same way...

They should know better!!!

I can't believe I just read through this...

This is an extract from the regs:

WHAT YOU CAN DO...
• Report new sightings. If you catch a round goby it should be
destroyed and not released back into any waters.
• Always dispose of your unwanted bait and the contents of your
bait bucket or bait bucket water on land or in the trash. It is illegal
to dump the contents of a bait bucket into any waters or within
30 metres of any waters.
• Never use gobies as bait.Itis againstthe lawto use gobies as bait
or have live gobies in your possession

Nice fish Noob...congrats on your pb...

They put up a good fight and can make some great runs...

For the fun of it, my friend and I decided to take part in the event this year. It was definitely a nice weekend to be out on the water.


The event began on Friday night just after midnight, so we planned to go right at midnight and get into the game as soon as possible. However, the weather did not cooperate; the wind picked up and the water got rough in the night, nothing like the nice warm day we had...So we changed plans and decided to go out early in the morning.


It was still cold, windy and choppy at 5am, but we headed out anyway. The bite was on; my friend got the first walleye which was close to 5 pounds...Within 10 minutes, I had one on. Then another about 15 minutes after that.

The perch were giving us a hard time; we just couldn't seem to keep them off. Once things slowed down a little, we headed in for a late breakfast.

We decided to make lunch soon after; there's nothing like a fresh fish shore lunch...

The weather changed drastically during the day; it was soo calm and quiet. We got into a few smaller ones as the evening progressed to night.

You could clearly hear the other fishermen talking on the other boats that were around...The full moon was beautiful; shining radiantly on everything with an equally graceful reflection on the water.
After another slow period, we decided to call it a night.

We got up a little late on Sunday morning, due to a little too much beer drinking the night before. Headed out around 7am, for what was definitely a day of tough fishing. Noone seemed to be getting any action. I was changing rigs every half hour in the hopes of presenting something different that would draw a bite. I did manage to get one more walleye and three decent sized perch to close of my weekend.