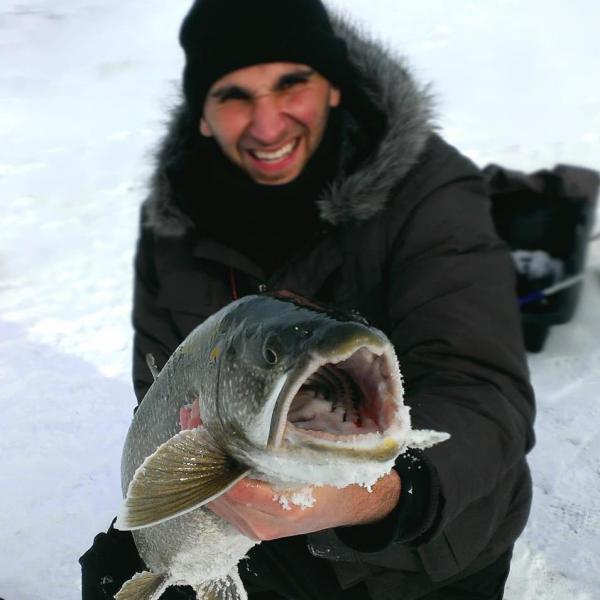 Well to say that I've had a stellar rainbow season thus far would be an understatement. And it's really just getting started. Lots of fresh fish since mid-September. All catches have been shiny and silver - healthy, hungry, wild fish - no observation of lampreys or lamprey damage.
The key for me this season has been fresh, UNcured chinook eggs from a tributary to the river I'm fishing. Simply water-hardened, right off the skein eggs. There are days I've been on the river and no one around is catching so much as a cold and I'm hammering fish.
Enjoy a few of the better pics ladies and gents. Hope to see some of you on the river, and CERTAINLY hope everyone has a great and fishy October!

Well I've been fishing the rivers for the past 3 weeks, hooked a few jacks but I don't generally target salmon. What I'm looking for is early steelhead that make their way into the rivers right alongside the chinooks.

For the past 3 weeks, I've come home with no stories to tell, no pictures, and a horrible skunky aroma clinging to my gear.

Yesterday morning I started at an old faithful spot, that did not produce. Talked to some guys who were saying the salmon seem late this year and we still need some rain. I agreed heartily but assured them there were lots of fish in the river. They balked when I spoke of mid-September trout. "I don't waste my time going for rainbows until at least mid-October".

I told them I believe that mother nature would show me good karma. That for putting in leg work and time on the water while the rest of the steelheaders were at home, I would be rewarded.

I tried two more spots, nothing. It is now noon. I pull up to my last spot of the day and cut through the property I have access to. I put a few drifts through my favourite pool and no dice. I decide to tie on an apricot bead 8mm and underneath it a chartreuse roe bag. This tandem combo is a reliable producer for me.

First drift and the float shoots down. I assumed it was a weed as the river IS still pretty warm and there is lots of growth, but I set the hook and *immediately* felt a powerful tug and then the pin started whizzing. There were a few times I thought for sure it was a small chinook as there weren't alot of headshakes, but several divebomb runs and a few rolls on the surface. No aerial displays.

2 minutes later this sweet sweet beast was at my feet. This beats my previously best "early steel" by 9 days.

I know there will be internet fish warrior defenders of the universe so please note that the bead was originally 2" from the roe bag. It slid up at some point.

Go for Sit on top kayak around 12-14ft long. Stay away from cheap brands and short kayaks.

I feel like this is prohibitive advice. You don't need a $1500 Hobie kayak to fish out of.

My first fishing kayak was a Clearwater Designs Tofino, made in Canada (Picton area), and I purchased from a local retailer for about $700 after taxes. Not only did I get a great deal on an amazing boat, I support a local company versus sending my money to China. If I had the elitist attitude that "I can only fish from a Hobie" I would have never experienced what an awesome kayak my Clearwater is. I absolutely love it. I installed a Scotty mount with fish finder, rod holder, GoPro mount, etc. and installed some flush mount rod holders. I still fish in that vessel. I've been out in very rough water and had no trouble navigating the boat. It's also an 11 footer. Unless you're covering a poop ton of water and care about speed, then you don't need anything close to 14ft. Also, a 14ft boat is a beast to haul around, in most cases for a 14ft FISHING specific kayak, you're going to need a trailer, or some system that will allow you to get it up on your roof. I've portaged my yak several kilometres a day in various Provincial Parks with ease.

Get something that will be practical for you. Not what someone else says you need in order to catch fish. The Tarpon or Ride135 are good suggestions if you can find them for a solid used price on Kijiji. But I think a Hobie or Jackson are overkill for someone new to the sport and will end up costing you way way more money for both the boat itself, and for accessories once you find that you need a trailer to tow it on, or a wheeelie cart to bring it from your car to the lake, etc.

bead is always the same, about 2" from hook. the premise behind the bead kind of betrays the idea that a fish would be hooked on the outside of the mouth, no?
fish eats bead and immediately turns around to return to its lie. as it turns and runs, the tension on the line pulls the bead out of the fish's mouth and the hook catches the inside of the lip on the way out.

maybe what you read is a statement like "What will happen is when you set the hook, your pulling the bead out of the fishes mouth driving the hook into the out side corner of the mouth every time" where, by "outside corner" he simply means, the deepest most crevice of the side of the mouth. not specifically the outside of the mouth. ?? just speculation!!

i've just never heard that theory and never foul hooked a fish with a bead. i'd throw a piss fit if a CO tried to charge me though LOL

you could have just given him the link to centerpinangling.com instead of copy and pasting their entire float rods product page LOL